Inspiration and learning in unlikely places Part 1 of 4: Humour & Comedy 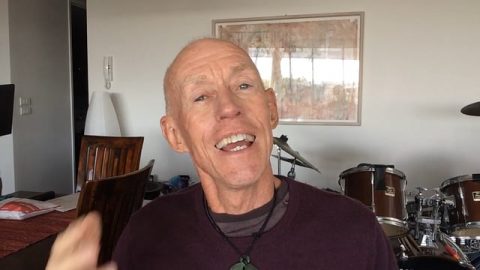 Sometimes wondrous things can be found in unexpected places. Which is what this series of posts is about. For those of us who work with young people, know young people, talk to young people…hang on! Is that just about everyone? …this particular post is about humour and comedy. And I want to take a look at three things:

As I write, the Doug Anthony Allstars have reformed and launched their new show. And Tim Ferguson, one of their members, jokes blackly and bravely as he sits in a wheelchair, about the Multiple Sclerosis which afflicts him. The Allstars have a stage show steeped in noticing hardship, embracing it, being totally sacrilegious about it, and generally, being funny, clever, courageous and downright heroic. Their own advertising for the show, which by the way is called NEAR DEATH EXPERIENCE, describes it as a: ‘…rude, crude show that’s filled with crazy irreverence that is above all absolutely hilarious.’ Go see them…you can book a ticket here.

I had the immense privilege, as did a number of Australians, to work in East Timor just after Independence. The country was destroyed and the population traumatized. My task was to work with a small group of East Timorese and members of the international community who had come to offer assistance…and to help build and strengthen relationships between the two so the assistance offered could be taken up. I won’t talk here about the detail of what I did, but I did constantly and cautiously look to find a place for laughter, lightness and play. When I interviewed a number of people later about their experience of what we had done together; two comments stood out for me. One was from a young man of around 24, who said: As humans we need to laugh, and lately we have not done a lot of this in East Timor…but over the past week we have laughed a lot …and this has been good for all of us. The second comment came from a woman in her forties who said that what we had done together created intimacy. For me as someone trying to make a contribution in a war-torn country, these were welcome and confirming comments. I am enormously grateful to East Timor and to those who I met there, for an experience which changed my life and confirmed for me a way of approaching the work I do, and as a way of approaching life and hardship.

Comedy, humour can help people heal the wounds of the past, and lighten the burdens of the present.

Of course, like we all do, I went looking for articles that support what I believe to be true. And guess what? I found quite a few. Psych Central tells us that humour:

Take a look at the extraordinary Eddie Izzard. But not now! Don’t go blue-lining off this page just yet…have a look later. It’ll still be there! Within seconds of being on stage, Eddie is talking to the audience about San Francisco, which is where he is at that moment. He doesn’t think: What would be a good ice-breaker here? He thinks: where am I? Who are these people? What do they care about? And then he starts by talking about the city they live in; the infamous San Francisco. He doesn’t tell them where the fire exits are or what their rights as audience members are – as important as these things may be – but starts by talking to his audience about something they care about…their city; the place they live. He starts with their stuff not his. Mind you, he is a man in high heels and make up, so he is kind of striking, but that aside (yeah right!), his audience warms to him because he’s talking about what they care about. And yes, people did pay to see him. But you get the point.

Here is a bit more of the researchy stuff:

‘Your brain needs to encourage you to update your incorrect ideas about the world and, like giving a dog a treat, it rewards you with a burst of pleasure…you get a shot of dopamine.’

And don’t we just love dopamine! Although I’m not crazy about the dog reference there.

And I can go on…but no need to…

And as we all know, these three ingredients are Timing, Delivery and Emphasis. Take a wee look at Dara O’Briain. This man is a gem. He starts by simply asking the audience a question: ‘How are ya?’ Then he slows down a tad and asks: ‘Are ya in good form?’ A different question and one that creates a sense of something good to come, and he uses words that are positive, uplifting: ‘good form.’ He asks: ‘Are ya in good form?’ twice, but it goes past quickly the first time, and asked again a little later…more slowly and with perfect delivery…and with a bemused look. Timing? Delivery? Emphasis?

The learning for us? Picking the right time, thinking about what we are saying and doing, how we are pacing what we are doing, are we proceeding with compassion and understanding or being more questioning? Are we being more supportive or more challenging? Do we need to move quickly or slow the process down a little? And what do we emphasise? What do we want to stand out in our conversations, our interactions with young people? Their shortcomings or their qualities and strengths? Their failures or their triumphs and victories?

Important ideas when working with young people, and especially if those young people might be suspicious, grumpy, bored, sad or even hostile. Dara also adds one further ingredient of humour; comics, he says, love brevity. Now there’s a lesson.

Do we need to be comics?

Answer: No. The comics have that area wrapped up. We are never going to be as funny and clever as Eddie or Dara. But we don’t need to be. We just need to watch them and wonder what we might learn there. Do we need to rehearse? No. Engaging with a young person is a natural and organic process. But it is worthwhile thinking about what we do and how we do it. Our work benefits from thought, reflection, exploration and adventure. The more we do this, the more value we are likely to be to the young people we work with. And we could do a lot worse than looking to the world of comedy and humour for something thought-provoking.

I wasn’t going to put in this next quote because I often feel a bit embarrassed (and very pleased also) when people say nice things about my work, but I decided to include it here because it’s probably the most valuable reference I can give you. This is what a girl said (perhaps 15 years old?) after I facilitated a Mental Health Forum for young people:

We’re not all funny and we’re not always funny. Nor do we have to be a laugh a minute, but it is useful to be mindful of the healing power, the connecting power, of humour.

2 thoughts on “Inspiration and learning in unlikely places Part 1 of 4: Humour & Comedy”

Find out about upcoming training workshops and new resources.